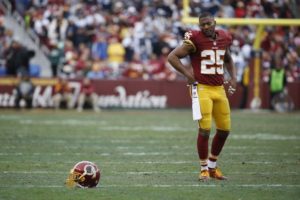 In 2007, Ryan Clark’s name made its way around the sports world when the former LSU safety and then Pittsburgh Steeler was forced to undergo surgery to remove his spleen and gall bladder after a game in Denver.

Clark, who carries the Sickle Cell Trait, had a flare up following a game against the Broncos, caused by exerting himself at the high altitude at Mile High Stadium.

But Clark has since taken the opportunity to spread awareness not only about SCT but also about Sickle Cell Anemia.

“It’s so funny because I don’t even have Sickle Cell, I just have the trait, but when you talk to people about it, more people know because of that situation then any other,” Clark said during Ryan’s Run, a Walk/Run put on in partnership with the Baton Rouge Sickle Cell Anemia Foundation Saturday morning.

“They don’t know about it because I was actually sick, or that I lost my spleen or gall bladder, they just know I couldn’t play in Denver next time. That was the big deal, ‘Why can’t he play in Denver?’ You know, when you have that and you have an opportunity, you have to use that opportunity to help others. For me, I don’t necessarily need the help in that way but the total cause needs the help. Each individual person that has it also needs it. When you’re given a platform as an opportunity to help others, you try to use that the best you can.”

Clark said it was the second year he’d partnered up for the run and said it was important to keep the run going even with all of the flooding that has taken place in the Baton Rouge area recently.

“You think about the racial tension we had before the flood and then seeing people come together to help each other and to be there for each other during that time, we felt it would still be good to get everybody together and doing it,” Clark said. “It’s not so much about the raising the money anymore or the fundraising. It was about having an event where we could all be together.”